TBI researchers are part of an exciting new discovery in Yellowstone National Park! For only the third time in 100 years, scientists have discovered a new type of light-harvesting bacterium. This surprising organism, now known as Candidatus Chloracidobacterium thermophilum, was described in the July 27th 2007 issue of Science magazine. The article was written by Don Bryant from Pennsylvania State University, who was a visiting scientist with TBI during the summer of 2005, along with TBI professor Dave Ward and numerous colleagues.

Cab. thermophilum grows alongside cyanobacteria, or blue-green algae, at temperatures of 50 to 66 degrees Centigrade (about 122 to 151 degrees Fahrenheit) near the surface of the colorful microbial mats that line many of Yellowstone’s thermal features, where it is exposed to both light and oxygen. Unexpectedly, the new bacterium has special light-harvesting antennae known as chlorosomes, which have never been found on any other members of this kingdom, or any other aerobic microbe.

The existence of this extraordinary bacterium was discovered through metagenomics, which is a new way of studying organisms that does not require culturing them in a lab. It is an especially useful tool for thermophilic microbes, as they are notoriously difficult to culture. Samples can be collected from Yellowstone’s microbial mats, and the DNA can then be extracted from the cells and sequenced on a very large scale. Analysis of the DNA sequences reveals what types of genes and organisms are present in the environment.

The team investigating Cab. thermophilum focused on two genes: the gene for a protein called PscA, which is essential for photosynthesis, and 16S ribosomal RNA, which can be used to determine the type of a microoorganism. When they found both genes on the same genome, it was apparent that they came from a novel, photosynthetic organism.

The organism was discovered in the same hot springs where the famous microbe Thermus aquaticus had been isolated almost forty years earlier. T. aquaticus revolutionized the PCR procedure, opening up an entire field for DNA studies and eventually paving the way for the metagenomics procedures that revealed the existence of Cab. thermophilum. This remarkable new discovery shows that the thermal features of Yellowstone still hold many secrets, even after nearly half a century of reseach. 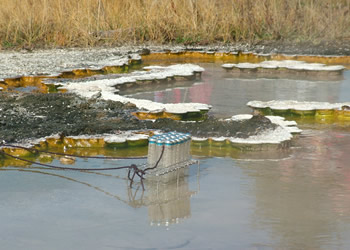 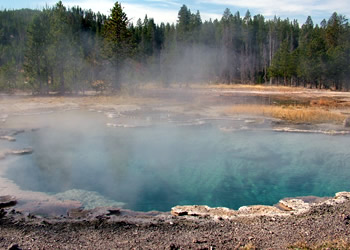