TBI faculty Prof. Dave Ward and Prof. John Peters, with collaborators from the Carnegie Institute at Stanford and the University of Copenhagen, have discovered that photosynthetic bacteria living in mat communities in Yellowstone thermal features have two metabolic identities. During the day, these bacteria use photosynthesis to transform solar energy and carbon dioxide into sugars and oxygen. After the sun goes down, however, the bacteria unexpectedly stop photosynthesis and begin to convert nitrogen gas (N2) into compounds useful for cellular growth. The work is part of a large collaborative effort funded by the National Science Foundations’ Frontiers in Integrative Biological Research (FIBR) program, led by Prof. Ward. The team for this FIBR effort includes scientists at the Carnegie Institution at Stanford University, Wesleyan University, the University of Copenhagen, and the Institute for Genomic Research. The work was recently published in the Proceedings of the National Academy of Sciences and is the first documentation that an organism can juggle both metabolic tasks within a single cell at high temperatures, and it also helps to answer longstanding questions about how hot-springs microbial communities get their essential nitrogen compounds necessary for life.

The FIBR group is studying the tiny, single-celled cyanobacterium Synechoccus. Cyanobacteria are the oldest photosynthetic organisms on the planet, and they are the main photosynthetic power plant in the colorful microbial mat communities that line many Yellowstone hot springs. Microbial mats in Yellowstone’s Octopus Springs contain Synechoccus that can grow in waters where the temperature can climb to 160ºF. Yet until now, it was unclear which members of the microbial mat community could fix nitrogen, especially in the hottest regions of the mat.

All cells require nitrogen for making proteins and nucleic acids, but N2 gas from the atmosphere cannot be utilized directly; first, it must be reduced or “fixed” into larger compounds which contain carbon. N2 fixation is a problem for photosynthetic cells, since the oxygen produced during photosynthesis inhibits the nitrogenase complex, which serves as the enzyme factory that fixes the nitrogen. Photosynthetic organisms have developed creative solutions to this dilemma. Plants, for example, rely on symbiotic N2-fixing bacteria that live in their roots, far away from their photosynthetic leaves.

A different type of cyanobacteria found in microbial mat communities grows in multicellular strands and makes specialized N2-fixing cells, called heterocysts, which are walled off from the photosynthetic cells. It was long believed that these strands of cyanobacteria were the major N2 fixers in microbial mats, although they cannot tolerate extremely high temperatures and live only at the cooler edges of the mat. Researchers speculated whether or not N2 fixation was necessary, or even possible, for organisms in the hotter regions of the mat. 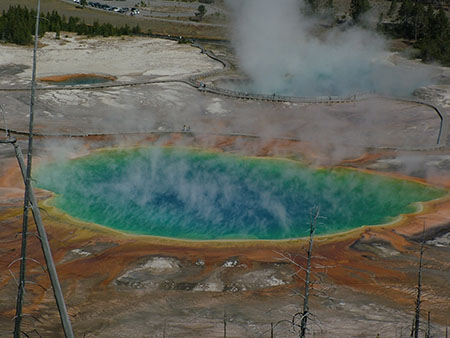 The colorful bacteria of Grand Prismatic Springs photosynthesize during the day and fix nitrogen at night.