Viruses have a bad reputation. The virus, whose essential nature is to infect a host cell, replicate and package its nucleic acid, and move on, has long been viewed as nothing more than a carrier of disease. However, two TBI scientists are taking a second look at viruses and discovering amazing potential.

Viruses may be the most abundant biological entity on the plant, second only to prokaryotes in biomass. They come in an amazing array of shapes and sizes, from 18 to 500 nm for icosahedral structures to >2 μm for rod-shaped viruses. Viruses have also evolved to move through a wide range of chemical environments, and they exhibit remarkable plasticity; they can be chemically and genetically altered without affecting their overall architecture or stability. For example, it is possible to reverse the charge on the interior surface of the capsid from positive to negative without changing the structure of the virus, or its ability to assemble.

Sometimes, either spontaneously or through genetic manipulation, a virus will assemble an empty, noninfectious container, which does not contain genetic material. For Douglas and Young, these empty viruses have the potential to become the perfect carrying case for nanoscale materials. Medically therapeutic chemicals, such as the anticancer drug doxorubicin, can be “caged” in a virus until directed to release the chemicals at the targeted cell.

Viruses interact with their environment through their exterior surface, a perfect platform for multivalent presentation. This multivalent surface allows the virus to target specific cell and tissue types, and to avoid the host’s defense mechanisms, properties with clear implications for drug delivery. The virus cages that Douglas and Young are researching could act like tiny Trojan horses, carrying therapeutic drugs directly to the cells that need them while minimizing unintended damage to healthy cells.

The biological world is often viewed as a limited source of raw materials, because most organisms exist in such a narrow range of temperature and chemical conditions. Douglas and Young, along with other TBI scientists, are challenging this perception through their discovery of life and its associated viruses in Yellowstone National Park’s extreme thermal environments. Viruses that are able to survive in areas previously believed to be completely devoid of life have received their reputation unfairly—future virus applications may help to cure disease, not cause it. 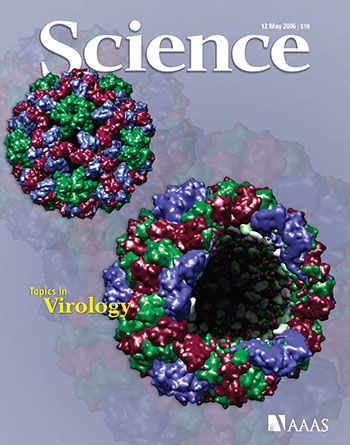