The superheated and acidic waters of Yellowstone National Park are home to a dizzying array of life, including members of the Archaea, as well as the viruses which infect them.  Sulfolobus turreted icosahedral virus, or STIV, is a virus which infects the Sulfolobus species that thrive in Yellowstone thermal features, and it was the first non-tailed icosahedral virus to be characterized from an archaeal host. Because the study of these unique viruses is still in its infancy, very little is known about STIV; though clearly, much remains to be learned from these thermophilic viruses.  Further study of STIV is expected to provide genetic, biochemical, and evolutionary insight into thermophilic viruses in general, their hosts, and the requirements for life in such extreme environments.

The STIV virus encapsidates a circular, double-stranded DNA genome which encodes for 35 viral proteins. TBI’s Young, Douglas, Dlakić, Copié, Bothner and Lawrence laboratories are all collaborating on studies to better understand the virus, its hosts, and the strange ecosystems that thrive in Yellowstone’s geysers and hot springs.  The results of two such studies, spearheaded by the Bothner and Lawrence laboratories, respectively, were recently featured on the cover of the Journal of Virology. The results elucidated in the Bothner et al article are summarized in Archaeal Virus Provides an Evolutionary Link to a Common Ancestor.

The work of the Lawrence laboratory is focused on structural studies of STIV proteins.  While proteins similar to those encoded by STIV are generally not found in the existing databases, it is highly unlikely that most of the STIV genome codes for unique proteins serving novel functions.  Rather, similarities in protein sequence are probably unrecognizable due to their distant relationships to homologs in other organisms.  However, distant similarities can often be unlocked through studies of protein structure.  To this end, Eric Larson, a graduate student with Dr. Lawrence, used X-ray crystallography to determine the structure of one such protein, A197.

The crystal structure of the A197 protein, one of the first STIV proteins to lend itself to this technique, reveals that it is a glycosyltransferase, a protein that transfers sugars to other proteins.  The realization that A197 is a glycosyltransferase adds to growing evidence that the STIV virus may be part of a viral lineage that predates the three domains of life.  A glycosyltransferase protein is also found in related eukaryotic and bacterial viruses.  It is thought that A197 functions to add complex sugars to the outer surface of the virus.  An increased level of such sugars has been correlated to environmental extremes in temperature, pH, and salt concentration. Thus the A197 protein may help to stabilize the STIV viral capsid, allowing it to exist in the boiling, acidic hot springs of Yellowstone National Park. 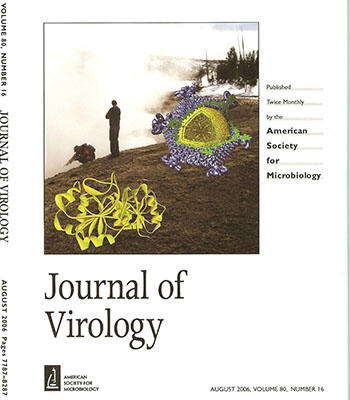