Archaeal Virus Provides an Evolutionary Link to a Common Ancestor

There is a certain type of virus, called an icosahedral nontailed double-stranded DNA virus, which is found is all three domains of life, Eukarya, Bacteria, and Archaea. This significantly widespread distribution has led to speculation about a single common viral ancestor, which predated the divergence of the three domains of life. However, in comparison to viruses that infect eukaryotic and bacterial hosts, very little is known about viruses that infect Archaea. These viruses, and their hosts, tend to live in extreme environments and are notoriously difficult to grow in labs. Our limited knowledge about these extreme viruses has hampered the theory of an ancient viral ancestor.

TBI scientists Mensur Dlakić, Trevor Douglas, Mark Young, and Brian Bothner along with postdoctoral researcher Walid Maaty and graduate students Jonathan Hilmer and Lars Liepold, are shedding some light on the mystery of archaeal viruses, their thermal stability, and the possibility of a common ancestor. Their results were recently featured on the cover of the Journal of Virology.

The distinctive virus, named Sulfolobus turreted icodahedral virus, or STIV, preys on Sulfolobus which lives in extreme thermal environments. It was the first virus with an archaeal host to be isolated from hot springs in Yellowstone National Park. The TBI team first isolated the STIV virus’s DNA, but this DNA was not immediately recognizable, or clearly related to other double-stranded DNA viruses. To determine whether or not similarities actually existed between this new virus and existing viruses, TBI scientists turned to studies of the structure of both the STIV virus and the proteins the virus DNA created.

These structures revealed more similarities between STIV and other double-stranded DNA viruses than its DNA alone would suggest. For example, they discovered that the virus itself has a two-layer shell. The external protein shell, which is shown in blue in the illustration below, is typical for many viruses, but the internal layer, shown in yellow, was a mystery. The TBI team discovered that the inner layer is made of lipids, the same fatty substance that creates animal cell walls. This lipid layer may help the virus withstand the heat of Yellowstone’s geothermal features. Although it is rare for viruses to have an internal lipid layer, some double-stranded DNA viruses that infect bacteria and humans also have this feature.

So, although the DNA looks different in the STIV virus, once TBI scientists generated a model of the virus and identified the specific proteins and lipids which compose the virus it became clear that the archaeal virus from the boiling waters of Yellowstone does have much in common with its more well-known double-stranded relatives. These similarities strengthen the idea of a common viral ancestor, which emerged in the beginning stages of life on this planet and followed its hosts through the division into the three domains of life. 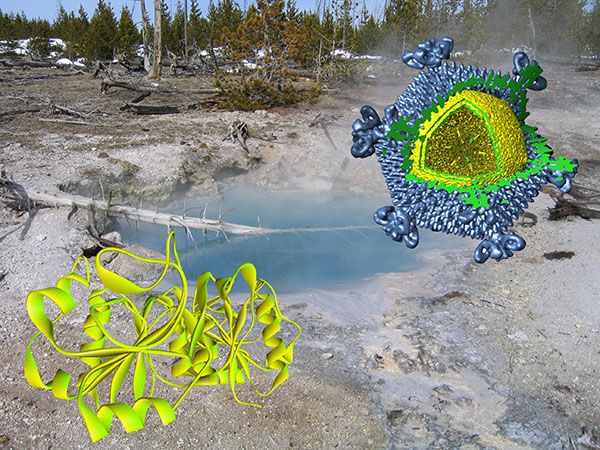